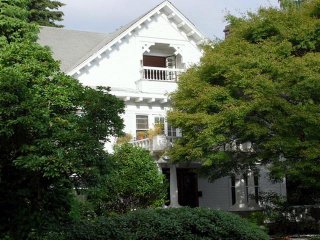 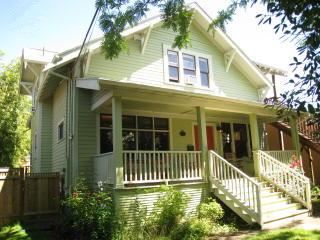 The Bluebird Guesthouse and Evermore Guesthouse are two comfortable B&B’s about a mile away from TaborSpace.

There are also a number of local AirB&B’s at very reasonable rates close by in the Hawthorne District in SE Portland, including the Slater House.

Portland is a foodie mecca and there are outstanding options for meals – from the famous food carts to the best in local, fresh dining. New Seasons natural grocery is close by at 41st and Hawthorne Avenue.

The nearby Hawthorne district is known for its young, progressive residents and pedestrian-friendly development. Hawthorne Street has numerous retail stores, including a branch of the famous Powell’s Books, Muse Art and Design, an independently owned art supply store, Fyberworks and other clothing shops, and plenty of restaurants, coffeeshops  and microbreweries.

Portland is very walk-able with good public transportation from the airport into the city.
The #15 bus stops right in front of TaborSpace – home of VIA Artistica, and the #14 bus stops at Hawthorne and 50th Avenues. If you are driving, there is a large parking lot on the northwest corner of 54th and Belmont Avenue for use by visitors to TaborSpace.